Consult An Oklahoma Attorney When Assistance Is Needed

Video Transcribed: This is part two of a canine series I’m doing, so if that’s what you’re looking for, you’re in the right place. My name is Ryan Cannonie, I am the Tahlequah criminal defense attorney for the Wirth Law Office in Tahlequah. And I did a first video kind of general.

Here are three types of working dogs police use, but this video is going to be specifically talking about search dogs, dogs that are trained to sniff out different substances or items, and possibly even people. And so that’s what I’m really reframing or confining this video to. 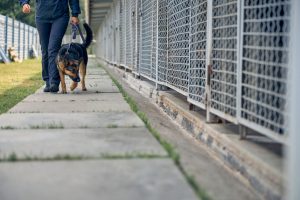 Most people have seen some type of search dog. Now, it could have been on the news, a search and rescue dog. The 9/11 dogs were, I think they’re all gone now. I know they are because it’s been so long ago.

But those were…Everyone talked about those for over a decade, and that was the first then. And I think maybe the Oklahoma City Murrah building was when the first time that the search dogs really became newsworthy. And so you have search dogs like that that are looking for people in rubble to try to help them.

You have other dogs that are actually trained cadaver dogs. They’re trained to look for a decaying and rotting flesh to try to find if you’ve got a body somewhere. You see them. They’ll go out and look for in fields and try to find a recent grave where someone’s tried to dispose of a body. You also have the more common, well, forgot one.

You also have explosive ordinance dogs. They’re looking for any of the chemicals that can be used for explosive devices. I’m not very familiar with those. I know that when I was a kid, we always had them around doing walkthroughs of schools and stuff. But to be honest with you as a prosecutor, I didn’t really deal with them that much. You saw them when there were bomb threats called into the courthouse, but that was about it.

The ones I do have the most experience with though are the ones that were trained to search out for controlled dangerous substances. Now, these dogs are trained to look for your marijuana, any type of cocaine, different substances.

And just because a dog is a search dog, especially when you’re talking about drugs, doesn’t mean it can search for every drug. Now, what that means is it’s been trained. Heroin’s a big one too, to search for certain types of substances. And the way they do that is they use amounts of those substances and reward the dog when it finds them, and when it finds and alerts in a certain way.

And so most of your agencies that have these dogs actually also have a little box that’s tightly regulated, or at least supposed to be that is full of drugs. And these drugs, they will hide them around places. When they go to do their maintenance kind of training with their dogs, they’ll put them in a desk drawer somewhere.

And so there’ll be a little bag of heroin in the desk drawer. And then you hope the dog can find it because that shows the dog still knows what it’s doing, but that’s how these dogs are trained. They’re trained for specific substances and rewarded when they find them, and they give a certain alert.

And so when these dogs are out in the field, they are significantly looking at your vehicle for these substances. Now, as a prosecutor, I saw all types of urban legends of how you can get away from a dog finding your whatever’s in your trunk or car or wherever, tires, spare tires cover in chili oil. There was a spare tire that they opened up and it was just full of chili oil with some drugs and money in it. I’ve seen people talk about coffee grounds and others just really like strong-smelling substances.

The way a dog’s nose works is it … And this is something I actually learned through Discovery Channel, but it doesn’t smell like we smell. When we smell the soup, we smell all the ingredients mixed together, which makes a nice smell. It’s really savory. We smell the soup.

The dog on the other hand smells all the components of that soup. If you’re mixing coffee grounds and layering them all over drugs, the dog is not smelling druggie coffee grounds. They’re smelling drugs and coffee grounds. A lot of those tactics aren’t going to work for people. You see that all the time though, but people still try it. 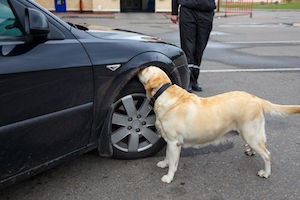 The thing about sniff dogs that most people don’t realize is that they’re not always sniffing. You have to give them a command to sniff. And so one thing that has come up are police using them for car searches. Now, this was actually a Supreme Court case. I believe it was called Rodriguez, where if you are pulled over on the side of the road and you’ve been pulled over for a traffic stop. Before Rodriguez in most places…

Now, Oklahoma law was already on this track, but in a lot of places in the country, cops could call in a search dog and you just had to sit there and wait, and it could be an hour or two before they got there. After Rodriguez, if you’re pulled over for a ticket, the officer writes out the ticket. Once they’re done writing the ticket, once the interaction’s over, then you can leave. They can’t hold you there for a search because at that point they’re detaining you illegally.

What’ll happen a lot of times is they will call in for the search dog as soon as they pull you over. As soon as they get back to their car, they have to, the officer has to, as I think the case uses the terms diligently be working on what they’re supposed to be doing.

If they’re doing a ticket, they can’t extend that to try to give the dog more time to get there. If they’re still working, they can take the dog around your car without your permission. That’s out in public. There’s nothing you can do to stop them. But if they’re done with the ticket and they want to hold you there for the dog to search your car, they have to have your permission.

And this gets into those things we talked about in another video I did call Consensual Encounters. These are, this would be a consensual search. This would be them saying, “Hey, do you care to hang out here? We want to run the dog around.” If you’re done there with what they were doing, like your traffic ticket, and that’s all they’re doing. And they start asking about you too…asking you to stay, that’s a huge red flag for you right there. If you don’t want to stay, they can and just hold you there without cause for the dog to search. 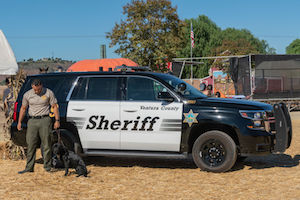 However, if, while they’re doing the traffic ticket, the dog goes around your car and it alerts you to something, then all of a sudden, they have a new reason to detain you and they get to search your car. That’s how searches work. This timing aspect of it is really important, so that’s something to definitely let your attorney know when you go in on a case like that. If these dogs …

One thing attorneys will look into is whether or not their training logs have been maintained. I know when I was a prosecutor, we had a guy who had a sniffing dog one time that did not maintain the training was. Was saying they were training, but it turns out they weren’t. We found that out, and that ended up with several cases being dismissed because the dog’s training hadn’t been maintained.

These are all things about sniff dogs I think is important for people to know that just because a dog is used on your case doesn’t mean that everything that dog found comes in. It doesn’t mean that it was used properly. There are all types of things like that. That’s why it’s important to get an attorney that can look into these matters and has some familiarity with them.

If you find yourself in this situation, if you have been pulled over, they ran a dog, they found something, you’re now charged. If you have questions about a search that was done by a dog, then please give us a call. Let us know your situation, and maybe somewhere we can help go online, tahlequahattorney.com. Shoot us a web form, and we will see what we can do to help you in your case. Thank you.